If you have been diagnosed with breast cancer and are experiencing financial difficulty or health care access issues, we are here to help. The DONNA CareLine is a resource available to answer any questions you may have and provide valuable insight to your patient care. The DONNA CareLine is funded by The DONNA Foundation and staffed by insurance and healthcare experts through a partnership with the Patient Advocate Foundation. To date, we have helped over 10,000 families living with breast cancer meet their critical needs. Help comes in many forms; it might be providing much needed transportation to and from treatments, making a co-pay payment on your behalf, assisting with child care payments during your treatment, or help with household utility bills. The needs are countless, and we will work tirelessly, every day, to help you meet all your needs during this difficult time. The DONNA CareLine is available to you 365 days a year, 24/7.

The DONNA Foundation Gets Involved in the #WOMENWITHWILL Project 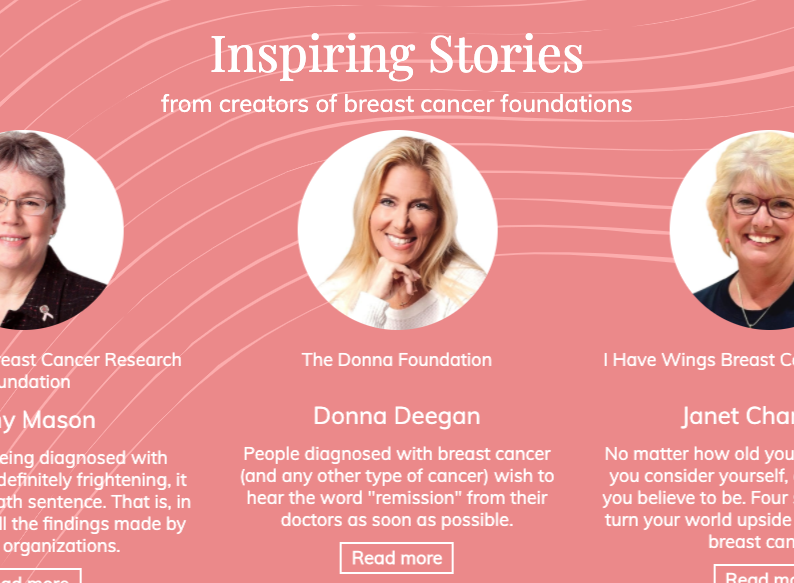 THE DONNA FOUNDATION GETS INVOLVED IN THE #WOMENWITHWILL PROJECT

The Donna Foundation Has Taken Part in the Initiative Created by AmoMama Media Limited, an International Online Media Website with an Audience of over 23 Million People, To Help Raise Breast Cancer Awareness

AmoMama has created the Women With Will project, an initiative that consists of posting a series of interviews with the directors of breast cancer foundations and breast cancer survivors.

By doing so, they get a platform to share their experiences dealing with the disease and to communicate what they have been doing to support patients. Women With Will is also determined to help foundations receive more donations from their audience through a “Donate” hyperlink added to their articles.

“Our goal is to help their stories reach and educate as many people as possible,” said Edduin Carvajal, AmoMama’s correspondent and editor of the project. “It is the perfect opportunity to not only share the stories of breast cancer survivors and spread the word about the good deeds that breast cancer foundations do regularly but also to educate people on this disease.”

Journalist Donna Deegan, who was the anchor of “First Coast News” at WTLV/WJXX in Jacksonville, Florida, is one of the many people involved in the initiative. During her interview, a three-time survivor of breast cancer said, “None of us wished to be in this club, but my hope is what they see modeled from me is someone who is taking this negative and doing as much positive as I can with it. Hopefully, it gives them confidence that they can do the same.”

Apart from that, Donna added that their mission is to provide assistance to families facing breast cancer and to raise funds for translational genomics research at Mayo Clinic to help find a cure. They have a staff of four, and they move mountains! Tiny team, big heart.

The Women With Will project will be operating until the end of 2020, which is why AmoMama Media Limited is open to hearing more stories from breast cancer survivors and patients willing to help and educate others with their experiences. The company also urges other media websites to join their initiative.

Their non-political, independent, and nonpartisan content is shared in English, Spanish, French, and German with an audience of more than 23 million people through their several Facebook pages.

To learn more about the project visit the page WomenWithWill.